Billions of dollars are devoted to designing, producing, and refining materials and molecules for applications in many sectors of the world economy [1]. With the vast amount of data now available, can we automate the discovery of new materials with tailored physical and chemical properties?

One promising solution is to use generative adversarial networks [2]. As shown in the figure, the idea is simple: train a neural network — called the generator — to output candidate materials with certain desired properties. To give the network some flexibility, we also provide some unstructured, randomly chosen inputs. Its task is to convert these unstructured random inputs into a selection of new materials with the target properties. Of course, the generator does not physically create the materials, but rather simulates them. In addition to proposing materials, the generator can also provide the physical protocol for fabricating them. 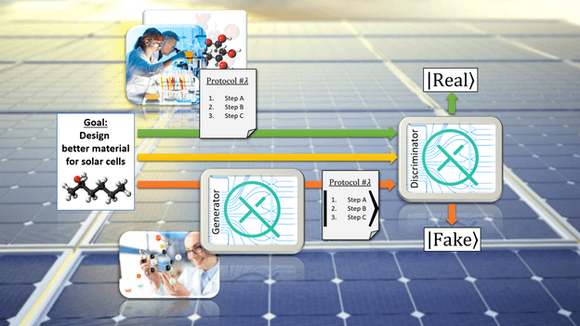 Illustration of the workflow used to train a quantum generative adversarial network with the goal, in this example, of creating new materials for solar cells.

This whole idea could work in principle, but in practice we would run into a very fundamental problem. The properties of the materials and molecules in our universe are determined by their microscopic constituents, which obey the laws of quantum mechanics. Ultimately, the stability of matter itself is a direct consequence of the fact that the physical properties of fundamental particles like electrons and nuclei are not expressed with probabilities, but with complex probability amplitudes. The interference of electronic amplitudes around nuclei is the mechanism which ensures that electrons do not collapse onto nuclei, countering the electrostatic attraction. The properties of the interference pattern determine, to various degrees, the large scale properties of a given material: whether it is an insulator, a conductor, a semiconductor, a superconductor, any kind of magnets. In fact, all properties of all matter, from the smallest molecules all the way up to neutron stars, are determined by interference! Nevertheless, accurately computing the interference patterns of complex probability amplitudes is difficult. In fact, it is so difficult that we must double the size of a computer each time we want to add a new quantum particle to a simulation. Therefore, it would be extremely difficult for a generative adversarial network coded on a classical computer to synthesize fundamentally quantum phenomena and generate revolutionary new molecules.

This difficulty can be turned into a powerful lever if we instead try to use the quantum behavior of the building blocks of matter to execute quantum calculations [3]. This is precisely why we are building a quantum computer at Xanadu. Universal quantum computers can simulate all physical phenomena in a way which is exponentially more efficient than current-day classical computers. By using universal quantum circuits, it is possible to extend classical adversarial networks to the quantum domain and to unlock the full power of quantum computers. In two new papers [4,5] with my colleagues Nathan Killoran, Seth Lloyd, Christian Weedbrook and I, we define these ideas for the first time: Quantum generative adversarial networks and quantum adversarial learning!

This kind of algorithm, being fundamentally quantum in nature, has the potential to be exponentially more efficient than its classical counterpart at representing and generating highly correlated data such as for our example in materials design. We can also imagine a future where more complicated optimization tasks would include minimization of production and logistical costs, as well as macro-economical quantities such as market supplies and the price of various financial derivatives. We expect that quantum machine learning will also be leveraged to improve our ability to understand the training of these networks.